While working with Sitecore deployments based on ARM and PowerShell scripts, developed by Rob Habraken (Rob has covered them in a series of blog posts on his own blog) and slightly optimized by me, I noticed that we are having a problem: these scripts are used on a per-project basis and once implemented, they start aging. Since manually updating scripts for each project is a dull and cumbersome task, it usually is never executed. So I decided to build a VSTS release task, which could be reused in each of our projects and makes it easier to always have the latest version of the ARM and PowerShell scripts for a certain Sitecore version.

You can check the PowerShell script at my repository over here. 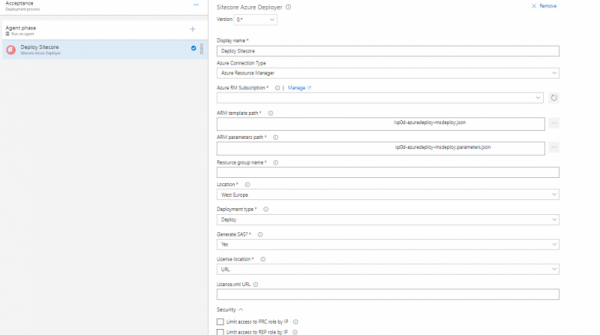 This extension uses a VSTS connection endpoint to authorize against Azure and will take the following input:

It is advised to deny access to the Processing role for everyone and allow access to the Reporting role for Azure only. Also, I checked with Sitecore and by default you do not need to deploy any custom code to these roles, which can speed up your deployment greatly. So, those checkboxes are needed only in case you are not deploying your own custom code on the Processing and Reporting roles and you are not running in ASE (as ASE allows to deploy additional firewalls in front of your web application).

That’s all I wanted to describe about this new extension. Feel free to contact me for additional questions, push PRs and discuss it on the repository.